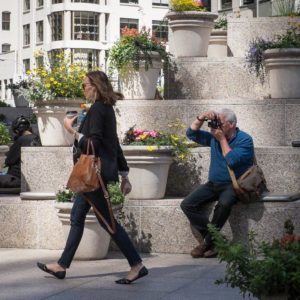 I have to admit I’ve always been a big fan of my guest for this week’s episode of the podcast, Doug Kaye. I have been following Doug’s work since when he was an IT expert and author, a renowned podcaster, and as of late, an excellent photographer. So it was a great pleasure and honor for me to finally be able to talk to him personally.

Beginning his visual explorations in his father’s wet darkroom, Doug earned a degree in theatrical lighting design at U.C. Berkeley in the ’60s and studied cinematography at NYU’s Graduate Institute of Film and Television in the ’70s. In the ’80s he began a two-decade hiatus from photography, when he started a system-software company that he ran for 18 years. He sold that business in 1996 and decided to work his way down the corporate ladder, service as CTO of four dot-com startups in four years. He retired in 2000, wrote two technology books and started a non-profit podcasting network.

Doug got back into photography in 2008. A trip to Kenya convinced him nature photography wasn’t for him, and Iceland cured him of his interest in landscape. For the past two years, Doug has focused almost exclusively on street photography, even reverting to film on occasion. Doug teaches photography locally in San Francisco and online, and was chosen as an Inception Master in Trey Ratcliff’s “Arcanum.” He leads street-photography workshops locally and in Cuba, which he has visited five times. Doug is the co-host of the All About the Gear podcast on the TWiP network.

I have also been planning to visit Cuba for a long time, but for reasons that are too long to explain here, never made that particular trip. Now, after hearing about it from someone who is an expert about the island country and seeing his photographs of it, I am getting inspired again. I would certainly love to be on one of Doug’s workshops, when I go there.