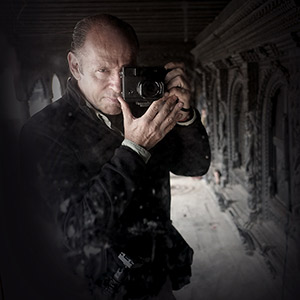 Harry Fisch has been a photographer for more years than he cares to remember. He has photographically documented more than 40 countries through which he has travelled.

Winner of the 2012 World National Geographic Photo Contest (places), and later disqualified, his work has deserved several awards: Two Jury Awards in 2014 at the Grand Prix de la Découverte, finalist in the Sony 2012 World Photo Awards and selected in 2010 by Photoespaña—possibly the most prestigious Spanish photographic event—in the section “Discoveries”. His work has also been published, among other publications, in “La lettre de la Photographie”, which was nominated best Blog of 2011 by the prestigious magazine LIFE.

Harry leads photo tours to exotic destinations with his company Nomad Photo Expeditions. After years of travelling, he has come to the conclusion that technique and vision are indispensable tools, but that empathy, curiosity, pleasure through personal relationships are the determinants which enable photography to transmit so much more than a postcard. As part of his personal work, Harry is currently developing a photographic project, “Les Miserables”, related to the work in the bricks factories of Nepal and the spiritual activity at the churches in North Ethiopia.

In this episode of the podcast, Ugo talks with Harry about what it means to take authentic travel photographs and why reality is not always what we would like to believe.